I have created a picture history of my day yesterday. I wasn’t comfortable taking Precious with me and I don’t have a small, pocket camera so I got all these pictures on-line.

First Katie and I had to drive through You-Know-Where. For some reason the car won’t make the trek without a Venti White Chocolate Mocha of some kind. Weird, isn’t it? I chose the iced version due to the blechy heat.

Jill (the GPS) and I had a failure to communicate and she took us some crazy way to Weehawken, but we got there in a decent amount of time so I’m not holding any hard feelings against her. Besides, Saturday I made a “Chick’s Road Trip” playlist and we weren’t in a huge rush so it was all good.

Finally we pulled into a parking spot at Port Imperial where we boarded a ferry for the eight minute ride across the Hudson. This is what we saw when we got off the ferry.

No, not “On The Town”. Wrong play. It was Fleet Week in New York City and there were Navy persons everywhere.

We hopped on the free bus to 8th Avenue and 42nd street and found our way to a hole in the wall deli for a light lunch of chicken noodle soup and a salad. From there we scoped out the theater, but with more than an hour to kill it was decided ice cream was a necessity. The streets were insanely crowded, but we would not be daunted. Pushing and winding our way through the masses of Times Square, an ice cream shop was located where we refreshed and fortified ourselves for the push and wind back to the theater.

The reason for a trip into Manhattan was to see “Guys and Dolls” on Broadway. 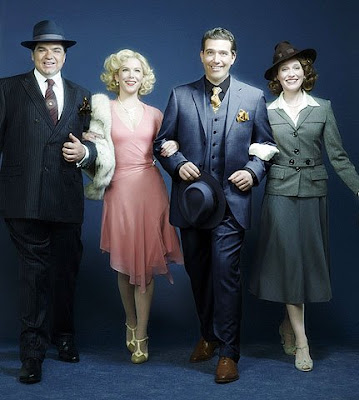 Sky Masterson was played by Craig Bierko, an actor you’ve probably seen around. For what it’s worth, I enjoyed him much more than Marlon Brando in the movie.

Nathan Detroit was played by Oliver Platt who was Porthos in one of my favorite movies – The Three Musketeers (1993).

But the highlight for Katie and me was the part of Adelaide played by Lauren Graham, otherwise known as Lorelei Gilmore on The Gilmore Girls.

The play was delightful and Katie and I thoroughly enjoyed ourselves. I do wish there was a Theater Etiquette Exam people had to pass before they were allowed inside, though. For example, if you resemble a door and you sit in front of a much less door-like person, please don’t keep leaning this way and that. And if you are married to a door-like person, please don’t rest your head on his shoulder and kiss him during the play when there is a person sitting behind you who is infinitely more interested in the action on the stage. Just sayin’.

Every time we go to Time Square Katie wants to eat at the Hard Rock Cafe. So can you guess where we went after leaving the theater?

Because food is such a large part of our New York City experience we decided to split an appetizer of potato skins and Katie’s favorite HRC dish, Twisted Macaroni and Cheese and Roasted Chicken. “Why did you split the meal?”, you may be asking. Why, so we would still have room to split a piece of cheesecake from Maxie’s, of course.

To decide on a piece of cheesecake I had Katie pick three and she chose Chocolate Marble, Oreo and Cookies & Cream. Next I chose two of the three – Oreo and Cookies & Cream. So Katie got to make the final pick. She chose Chocolate Marble. As usual, I forgot to take the picture with my phone until after we’d each gotten a taste.

I don’t think she truly got the gist of the game, but whatever. We weren’t able to finish the cold, creamy, chocolaty deliciousness, but we made a valiant effort.

Alas, the theater had been attended, Hard Rock Cafe had been frequented and Maxie’s cheesecake had been consumed. We had accomplished everything we’d set out to so we headed back for home. By the time we got to the car it was nearly 9:00. There had been storms between our house and New York and we could see lightening in the distance. Thankfully we skirted the storms, but we did drive through a lot of patchy fog which slowed us down a little.

You may know that I love old cemeteries. There are some around here with tombstones dating back to the 1600’s and I find them fascinating. During the day. Driving by dark and foggy cemeteries on a deserted country road, however? Not so much. This is the creepiest foggy cemetery picture I could find on-line, but it doesn’t do the true creepiness factor justice.

We finally pulled into the garage around 11:00 last night. Now we can’t wait to go back!