After Todd’s dentist appointment Friday morning we left for Baltimore. Before we’d gotten too far I complained that the spring mechanism in the little storage bin on the dashboard was stuck. Todd said, “you mean this?”, as he opened and closed the compartment repeatedly. 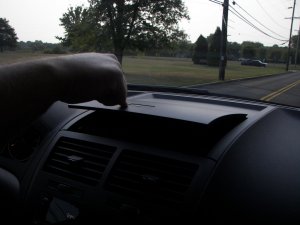 Y’all do know why they don’t send donkeys to school, don’t you? Because nobody likes a smart ass.

We got to the hotel around 11:00 and were gratefully able to check in early. When I had told Todd the hotel was near Camden Yards I didn’t realize this would be our view:

And here’s a little peak of 1st base:

The Orioles were in Toronto so no game for us. But we’ve decided to go back in the spring when they’re in town and stay at the same place. This hotel is all about baseball: 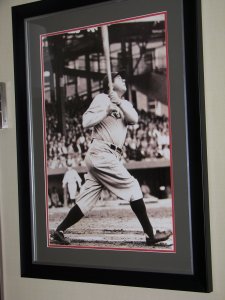 This picture of Babe Ruth was in our room. He may have played for the Yankees, but he was from Baltimore and is quite the hero there.

This cool glove chair was in the lobby.

And it was adjacent to what I refer to as “Pub Row”, so named for obvious reasons.

After a short rest we set off for the Inner Harbor and had to get even more photos of Camden Yards:

It’s one of the prettiest ball parks I’ve ever seen. 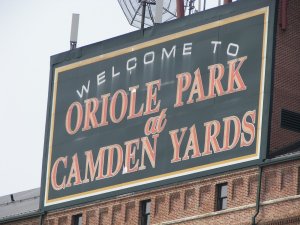 And finally, proof that baseball is a sport for the righteous: 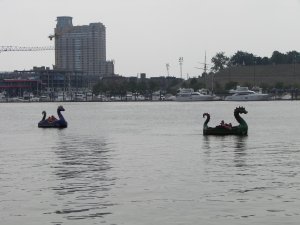 The Inner Harbor was less than a mile away, but it took us a while to get there because I had to keep taking pictures. Todd grabbed his jimmies and shuddered when he saw the paddle boats, momentarily caught in a bad memory.

We had a little over an hour before we could get in the aquarium so we ate lunch at ESPNZone.

<–I took a picture of this because the date is a combination of Todd's birthday and my birthday. The sentiment was lost on him, however. He looked at the photo and said, "Sweet! Sandy Koufax's 7th perfect game!" 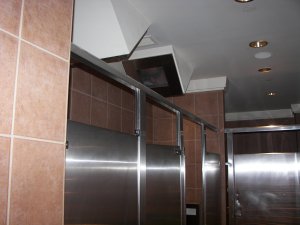 I had to take a picture of the TV in the bathroom. Guys seem to love watching sports while they’re doing their business. I personally found it a little disconcerting to have people bowling over my head.–>

<–Right above our table were "Stadium Dogs" – Acrylic Hot Dogs with dirt from various sports stadiums. The Phillies' Veterans Stadium just happened to be right above us. It seemed Providence had placed us in the perfect spot.

After lunch we walked across the bridge to the National Aquarium. This place is incredible and I highly suggest a visit if you’re ever in the Baltimore area.

Here are just some of the pictures I took:

As you look up to the top of the atrium when first walking into the aquarium. 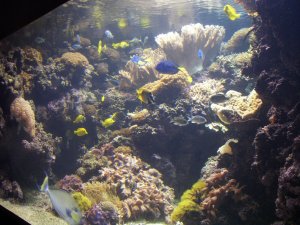 Blurry puffins. Or a blurry picture of puffins. Not sure which. 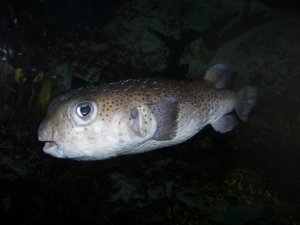 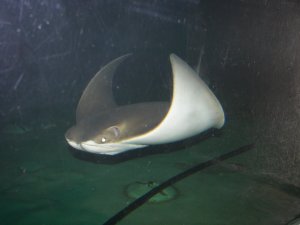 Australian Fruit Bats. These bats don’t eat bugs or drink blood. They only eat fruit. Regardless, I prefer viewing them from a distance.

Long Necked Turtle from Australia. This thing is just weird. 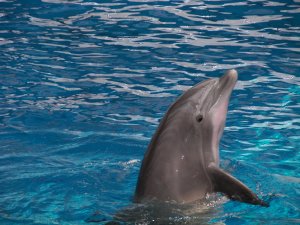 After we’d seen everything there was to see at the aquarium we decided to just hang out until we were hungry enough for dinner. Looky what was just across the bridge. 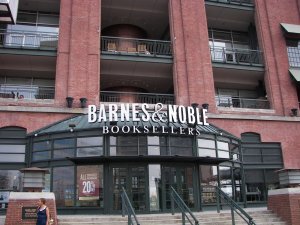 This had to be one of the coolest Barnes and Nobles I’ve ever seen. It’s part of the Power Plant, a trendy area of the Inner Harbor that also houses a Hard Rock Cafe, ESPNZone and several other restaurants.

Katie and I hung out in the book store for a bit while Todd and Taylor went back to the ESPNZone to play games. Katie’s smart that way. She knew I would have to buy myself a book or two and if I made a purchase for myself I would be inclined to make a purchase for her as well. She was right.

It’s always the same with me in a book store. First it’s the sense of belonging, of coming home, of deep peace as I take my initial steps into the store. Next it’s the feeling of being a kid in a candy store – all that literary yumminess surrounding me. Then it’s having to make decisions because I simply can’t buy everything I want to. And finally it’s a desperation to get out as fast as I possibly can because I can feel myself losing control.

So when we got to the losing control portion we quickly checked out and went in search of the boys. After finding them Todd and I sat and rested our weary feet while the kids ran around playing more games.

It was amazing how they weren’t hungry until their game tokens were gone. On the other side of the harbor, in the direction of the hotel, was a restaurant called Big Kahuna Cantina.

Taylor ordered his new favorite – BBQ Wings – off the appetizer menu. When I took this picture I thought the entire bucket was full of wings, but it wasn’t. The bottom half had chips. Even still he wasn’t able to finish them.

Katie had talked about ribs all day. These little beauties are glazed with Plum BBQ sauce and were quite delicious. 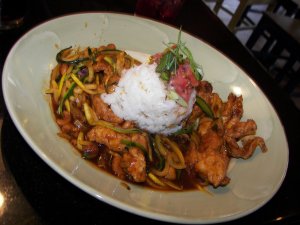 This would be my dinner. General Juan’s Chipotle and Honey Glazed Cashew Chicken with cilantro and mango sticky rice. It was scrumptious and spicy in a sinus-cleansing sort of way.

Todd had the coconut shrimp po’boy.

After stuffing ourselves silly we slowly schlepped back to the hotel on our sore feet, got comfy and watched TV until we all fell asleep. Without traffic it’s less than a two hour drive from the house, but I’m so glad we decided to stay the night there. We were so exhausted after our busy day and it was nice to just kick back.

Saturday morning we woke up when we woke up and Todd and I made it downstairs for breakfast while the kids lazed in bed and watched more TV. I know we only scratched the surface of Baltimore wonders and I can’t wait to go back and explore more!